Today Gay Murphy joins us to share her personal cancer story and tell us all about why she got involved with Relay for Life Wexford – a remarkable fundraising event happening again this July in aid of the Irish Cancer Society. 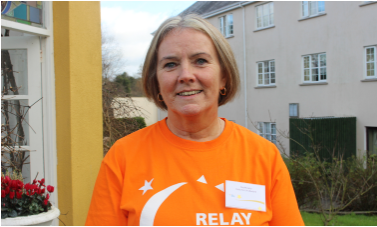 I got involved in Relay for Life because of a personal diagnosis of breast cancer and it was the best thing I ever did! Here’s my story.

I was diagnosed with Invasive Lobular Breast Cancer in the summer of 2014 and to say it came as a shock would be an understatement! I’d had a 25 year history of breast lumps and up to that point they had always been benign cysts, hence my feelings of utter shock and dismay. For me the biggest shock was when I was told I needed a full mastectomy, I always felt that if things were to go wrong that it would have been detected early enough to avoid a mastectomy… but unfortunately that was not to be. 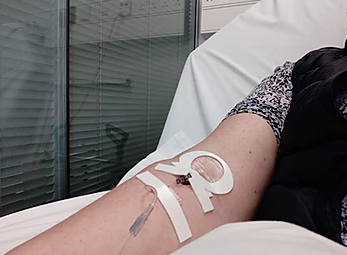 In the blink of an eye you find yourself thrown into a world of blood tests, biopsies, scans and surgery. I had a right mastectomy in July 2014 and while I developed a wound infection following surgery things eventually went on to heal well. Tissue from my mastectomy was sent to San Francisco for a test they call Oncotype DX.

The results indicated that I was at low risk for recurrence of the disease and so a decision was made that I did not need chemotherapy – life was good!

Because the cancer I had was hormone positive, I started on a hormone therapy. This brought with it its own issues and some nasty side effects such as joint pain, foggy brain and fatigue, but you know what… anything was better than the alternative. Eventually to try and improve my quality of life, I was switched to Tamoxifen and, while I did have side effects that warranted a few trips to theatre to investigate, I tolerated it much better and stayed on it for the next few years.

In January 2016, I had breast reconstruction by DIEP flap. This is where they take tissue and skin from your tummy and use it to recreate a breast without any need for implants. This was indeed major surgery (I was in theatre for 8 hours) with a long recovery time. For me, the hardest part was coming back to a heated room, and those of you who know me will know I love the heat, but it was unbearable! Anyway I recovered well, despite getting the Swine Flu during my recovery, and I was delighted with life. While a reconstructed breast is not a pretty sight, it was great to be able to wear clothes again without having to worry about how I looked.

The check ups continued and I was doing well until one day I felt a tenderness in my scalp. I mentioned it to my oncologist and she immediately requested a bone scan. This led to numerous CT and MRI scans and whilst there seemed to be a problem, nothing was conclusive. In the meantime, I found a lump in my reconstructed breast which they biopsied and unfortunately I was diagnosed with a local recurrence just before Christmas 2018.

I was devastated and terrified at the same time.

The idea of losing my breast for the second time was horrific and it felt as if the major surgery to have it reconstructed had all been for nothing, but as the days went on I started to focus just on surviving and if that meant losing my right breast again, then so be it! 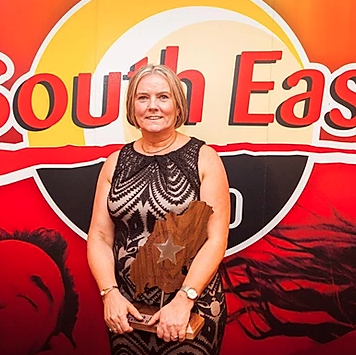 In January 2019 I won an Overall Outstanding Achievement Award from South East Radio/Talbot Hotel for my work with Relay for Life. I was on cloud 9, but it was pretty short lived because I was admitted to hospital 5 days later for my second mastectomy. While I was in hospital, the scans were all repeated and they also did a bone biopsy. The results showed that the cancer had also spread to some of my bones… how much more can a person take, you may ask? 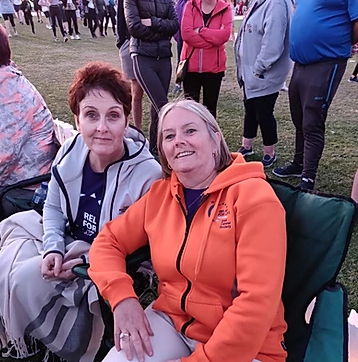 The answer is a lot more, because believe it or not, my youngest sister was diagnosed with colorectal cancer the very next day and my eldest sister was diagnosed with Her2 breast cancer just 5 months later! How we humans function, I really don’t know, but I do know that out of that darkness came hope. Hope that we could be treated, hope that we would do well and always that hope for a cure!

As they say in every bad situation, there’s always a positive and for me that has definitely been Relay for Life.

Relay for Life is a fantastic event that brings me joy. It brings the whole community here in Wexford together in the fight against cancer and it lets people know they are not alone.

At Relay, we Celebrate those who are surviving cancer, we Remember those we’ve lost and we Fight Back, not only by raising awareness around the great services provided by the Irish Cancer Society, but also by raising money to continue providing those services and to continue with invaluable research year after year. The Fight Back is critical… We all want to see a world without cancer, but until that happens we definitely want to see a world with less cancer, with earlier detection and with better treatment options and outcomes for those who are diagnosed.

We started Relay here in Wexford in 2016 with just 17 teams and we raised €20,000. We have seen substantial growth year on year and last year we had 49 teams who raised a whopping €130,000! While the money raised is hugely important and helps to fund some of the fantastic services provided by the Irish Cancer Society, Relay is much more than a fundraising event, we are actually building a lovely Relay community here in Wexford where everlasting friendships are being made. Wexford people have a great way of coming together as a community and supporting others in time of need and that’s exactly what happens at Relay. One lady, who had only recently lost her husband, described last year’s event as ‘one massive hug’ from start to finish, such was the support she felt at Relay.

The statistics say that 1 in every 2 of us will be diagnosed with cancer in our lifetime and that’s definitely the case in my family.

As a survivor I was proud to walk the opening lap at Relay in 2016 and 2017, little did I know that my Mam would walk that lap with me in 2018. Sadly we lost Mam to pancreatic cancer just before Christmas that very year! 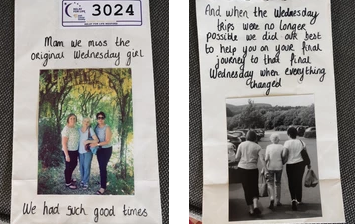 As a society it sure as hell looks like we’re facing into an epidemic, but we must not resign ourselves to that fact! We must keep fighting back and we can do that by continuing to Relay here in Wexford. The more friends and family that come out to Relay, the bigger the impact the Irish Cancer Society has in the fight against cancer. The more money we raise, the more drives that can be offered to patients going for chemotherapy, the more Night Nurses that will be available to look after loved ones in their final days at home and for me, and many others like me living with secondary cancer, more research… all of this equals hope and sometimes that’s all you got!

I’m passionate about Relay because I know only too well what a cancer diagnosis can do to a family, however, despite everything we as a family have been through, I feel we’re lucky in lots of ways.

My youngest sister has finished her treatment and is doing well, my older sister is nearing the end of her treatment and hopefully neither of them will ever look back. What about me? Well I’ll be on treatment for the rest of my life, but I’m tolerating it well and it’s working and whatever way you look at it I’m still here with my precious family and friends and that’s what matters.

My body has been through a lot and it has stories to tell. I hope by telling my story it will help others and encourage people to check themselves because the more we check ourselves for any signs or abnormalities the better the chances of catching cancer early and stopping it in its tracks!

My message to anybody who has read this far is check yourself regularly, never lose hope and make sure and come out to Relay for Life Wexford this year on Saturday 11th/Sunday 12th July where we will Celebrate, Remember and Fight Back 💜

Thank you so much to Gay for allowing us to re-publish your remarkable story. This article appeared first here on the Relay for Life Wexford blog. Gay, you are amazing and your strong attitude gives hope to many, thank you.