A bone tumour back in 2007 eventually led to Tanya Turner having a full leg amputation. Today Tanya joins us to share her inspirational story on how she is moving forward with her life and her project to raise funds for her new prosthetic leg. 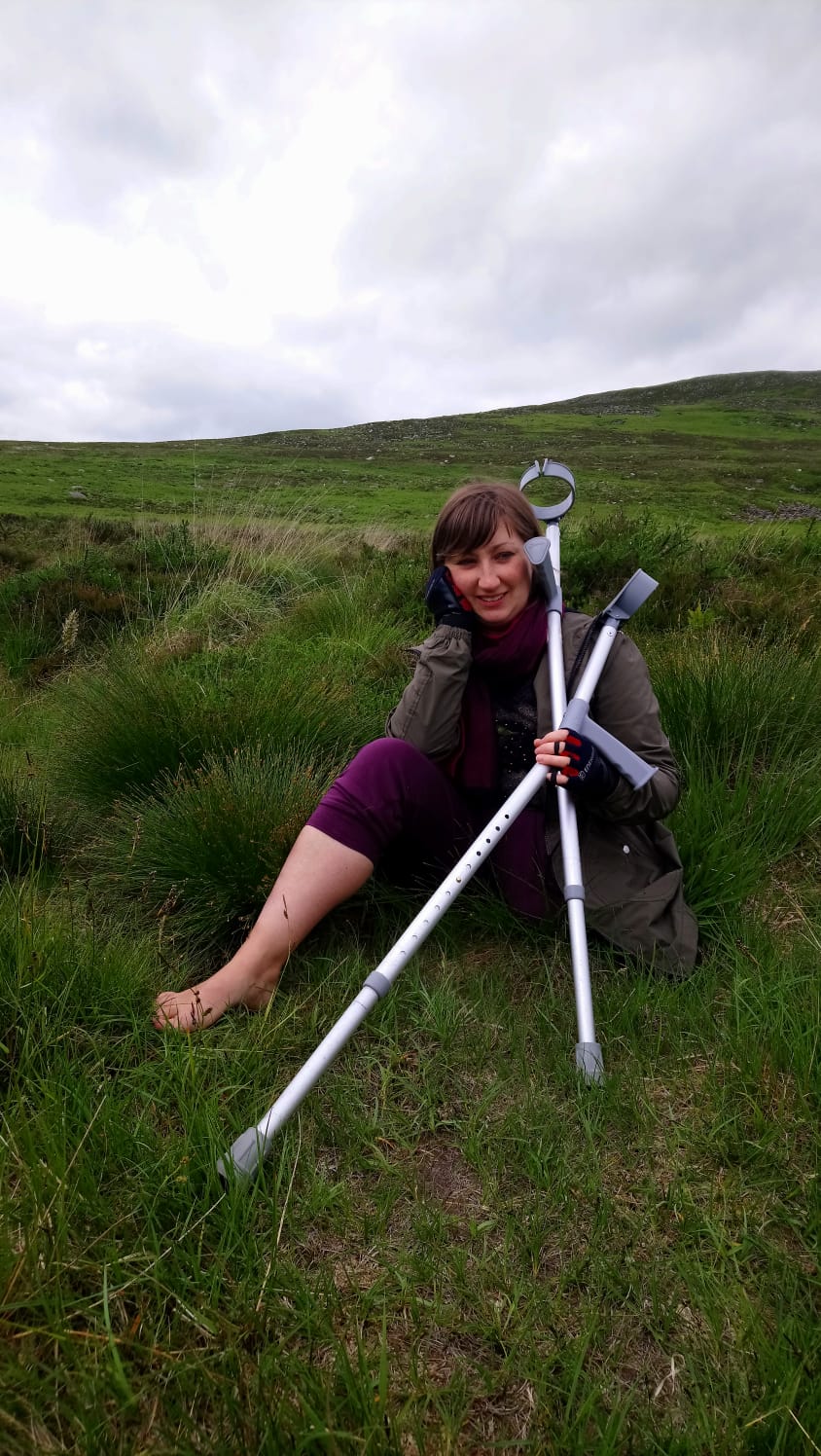 My name is Tanya Turner, I am 33 and I live up a long hill in the Blackstairs Mountains in Co. Wexford.

I was diagnosed with a bone tumour in my left leg back in 2007, when I fell off my bike and ended up in A&E. At the time, I was told the tumour was ‘benign but aggressive’, meaning it was in the locality of my leg, but still had to be removed ASAP. Luckily, the operation went well, and I was able to go back to work; I even took up salsa dance classes… But then the tumour came back in 2009, resulting in a second operation in 2010 (knee and femur replacement). The biggest difference with this one, however, was that the surgeon’s team analysed a sample of the tumour and found it had become cancerous, thus needing 6 months of chemotherapy. I clearly remember the day I was given that news! It was horrible, so incredibly shocking… Like many other people in that particular situation, it only fully hit me when the nurse said: ‘Yes, you WILL lose your hair’… I couldn’t believe it, I just cried and cried… Thankfully though, I have an extremely supportive family and some great friends, who really helped me throughout that time (not to mention the HOPE Cancer Support Centre in Enniscorthy – full of amazing women!). 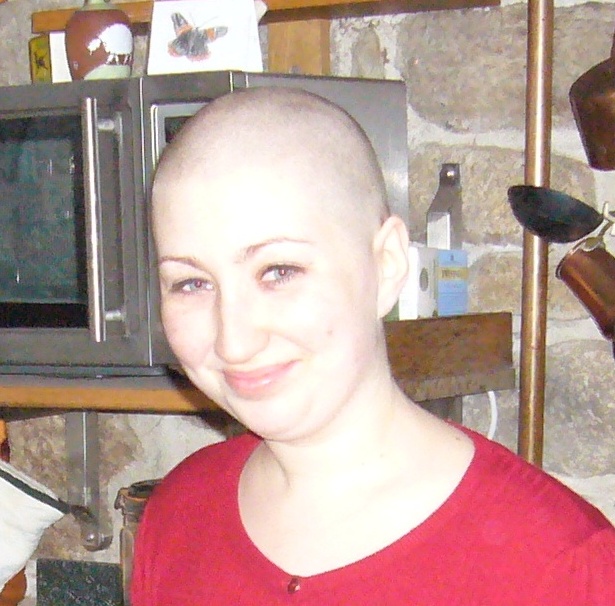 I was told at the outset of the treatment, that I was to get the strongest dose of chemotherapy (being young and relatively fit), for a period of 6 months. And boy! – did I feel that dose when it hit… Within a few weeks of receiving chemo, the nausea kicked in; just in time for Christmas dinner! Typical. Then within a month or so, my hair started coming out, to the point where I decided to just shave it all off and be done with it. My mum helped me to shave it, and as we both said – at least my head turned out to be a nice shape! And as my best friend then told me: ‘It’s so nice to be able to see your eyes, now that you haven’t got that long fringe hanging over them!’  Of course, she was incredibly kind and sympathetic – but between her humour and mine, we made that time go by a bit easier…

As the treatment went on, the side effects started to accumulate. Apart from the constant nausea and almost daily vomiting, as someone who already had sensitive skin and was prone to mouth ulcers, those things got much worse! I remember trying to eat the big spread of food on Easter Sunday 2011, at my mum’s house; it was so hard to take (especially since I LOVE my food!). The most I could handle was a soft-boiled egg and a piece of smoked salmon, which took me about an hour to eat, painfully… I couldn’t believe it. And from then onwards, I caught various bugs, the worst of which was a throat infection which eventually lead to a high fever and ‘fatally’ low white blood cells, landing me in A&E, Wexford General. I was put on an isolation ward, something I hope to never repeat again; so much fear and thoughts of: ‘Will I get better? Will I react to the antibiotics?’ etc. One thing that really helped me at that moment, was the kindness and attention of one particular nurse. She was on her rounds, but took the time to sit with me, despite her workload; she told me I was amazing, and that I would get through this, and to imagine myself in the future – healthy and happy, doing all of things I enjoyed again, with everyone I loved around me… That moment and her advice were so important to me, and both helped me to improve, psychologically and physically. 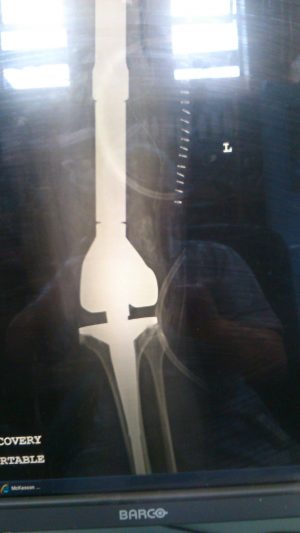 An x-ray of my knee replacement 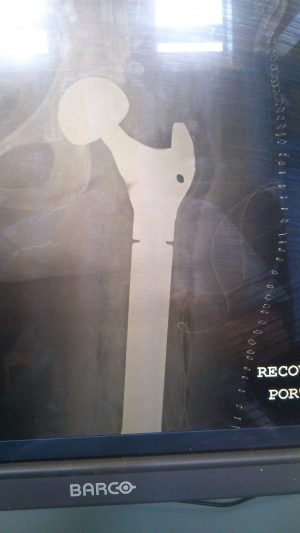 An x-ray of my hip replacement

And thankfully, I am here to tell the tale, with the only permanent damage (up to that point) being some loss to my hearing. My hair started to grow back, and I started to live my life again. However… Nothing lasts, and this could definitely be said for my health back then! In 2017, having been given the ‘all-clear’ in 2016 and moved to Prague for a job – I flew to Dublin in April for a routine leg x-ray. This was to see if my knee and femur replacement was still holding firm; and it turned out, that wasn’t the worst of my worries… Apparently, my hip bone was just ‘crumbling away’, and would have to be replaced (along with the knee and femur AGAIN), within a month! So in May of that year, I had my knee, femur and hip bone replaced, which all seemed a success; except…

In August 2017, only just recovered from the last op, my new oncologist requested a CT scan and a biopsy of my knee and lymph nodes, ‘to check’; they found evidence of cancerous tumours in the muscles and soft tissue all around my left knee. I was emotionally completely torn apart… Firstly, my biggest fear was whether they would make me go through chemo a second time, something I dreaded; but when my oncologist said ‘No, there’s to be no chemo, it’s not in the lymph nodes’, my relief was short-lived. She quickly followed this up with the statement: ‘We will have to remove your whole left leg’. Wow… I hadn’t up until then believed there could be something worse than chemotherapy, but it turned out, this was it. Myself and my mother just stared at each other in shock, sitting in the oncologist’s office, then started to cry… It took the whole day to really sink in, with both of us thinking: ‘Why? What have we done to deserve this, now? After we thought we were free of all this?’.  But of course, sink in it did, and I spent the next few weeks looking up various websites, people who had done well after amputations, people with higher level amputations etc. I found so many inspiring and beautiful people… Still, when I finally went to be told the exact level my amputation would be at, my heart sank, yet again: it was to be up to and including my hip joint! Now, I knew from looking those up, that this meant wearing a huge, bulky socket contraption around my waist, essentially meaning (in my mind at that moment): ‘Goodbye, femininity! Hello awkward, clumsy life…’ 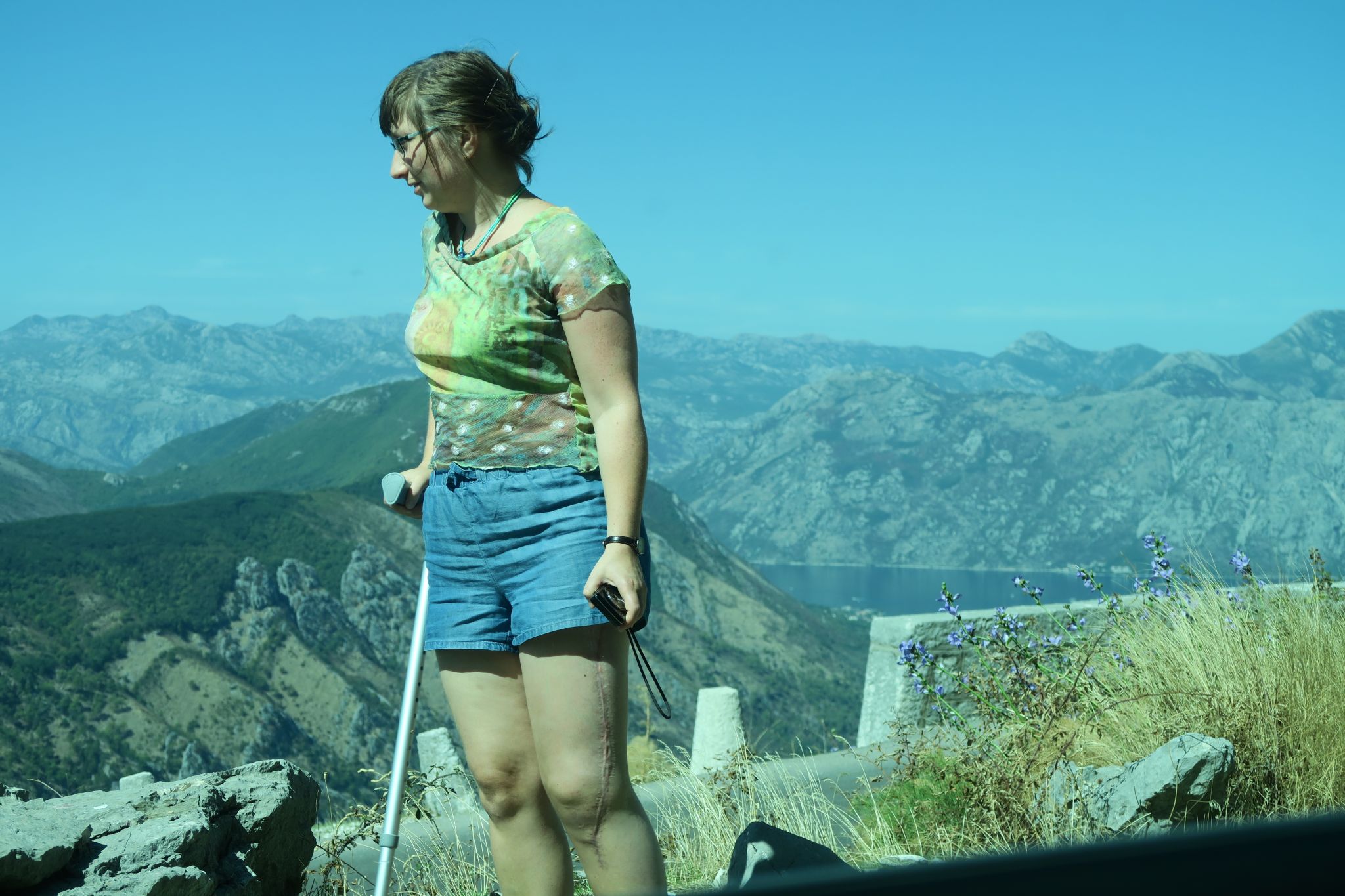 Me in Montenegro in September 2017

I pulled myself together then, and decided – since the operation was to be in October, only 2 months away – that I would make the best of the time left on my two, natural legs. I took a road trip all around Bosnia, Croatia and Montenegro with my then-boyfriend, and thoroughly enjoyed it! (Apart, of course, from the pain in my left knee…). Then on October 4th, 2017 – my leg amputation was done… I recovered well, all things considered, and was sent home after only 5 days. However, that was far from the end of it, as severe phantom pains soon kicked in…! These continued for about 3 months after the operation, but thankfully eased from then on. 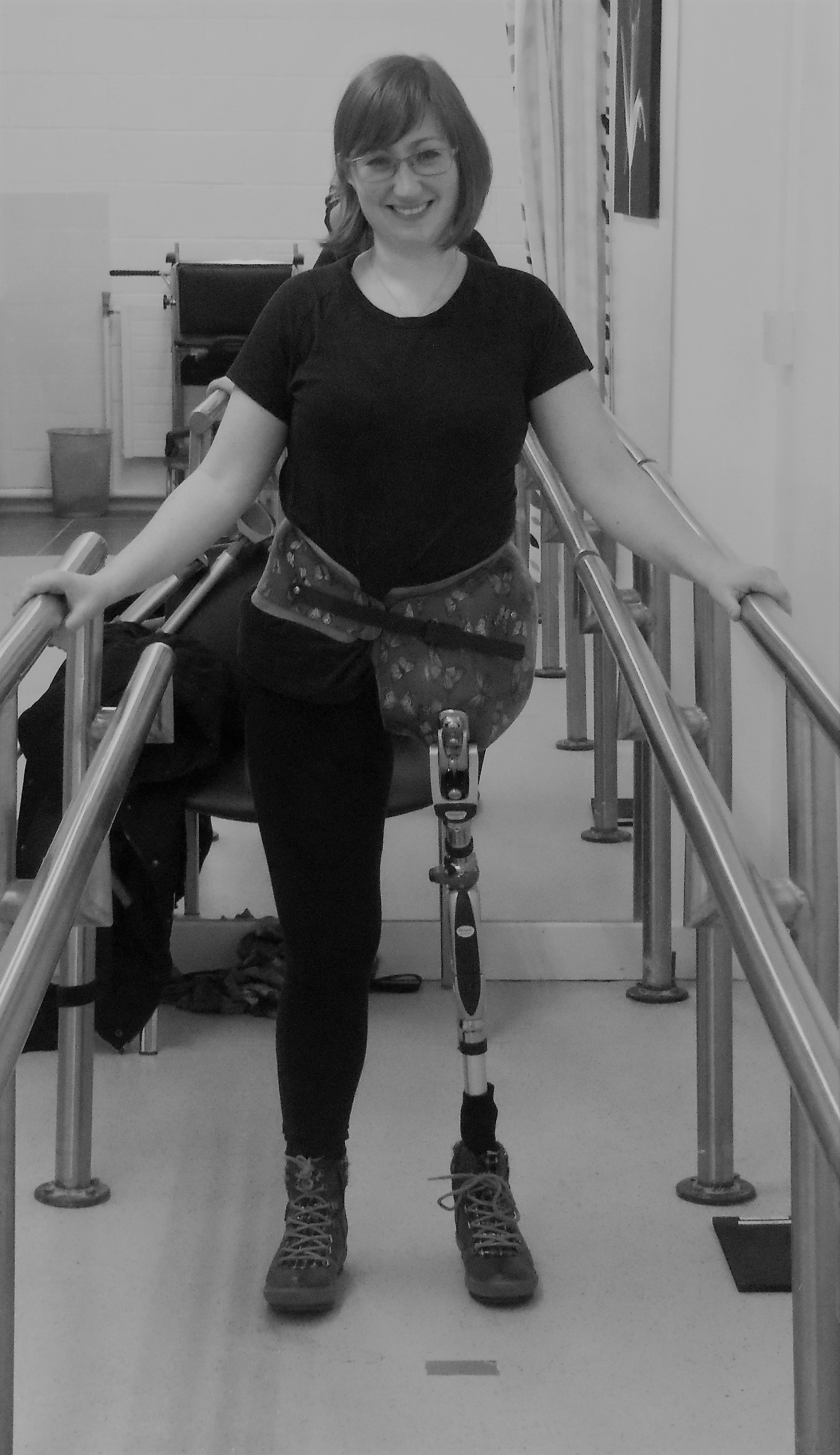 Me on my prosthetic leg

And now, a year and nearly 8 months on, I feel so much better in myself. Strangely and amazingly enough – I now feel more confident in my own body than I ever did, before all of this happened to me! I distinctly remember one particular moment during my chemotherapy treatment, when I looked at myself in the mirror at the hospital: I could clearly see that I was bald, with dark shadows under my eyes and skinnier than before. However, in that moment – I also saw ME, and realised that I even LIKED me! It’s hard to explain, but I suddenly saw myself as beautiful, and since then, the feeling has grown from there… Add to that the amputation, learning to love my body all over again, completely differently – and it’s been a huge learning curve… I feel that I have become much stronger, both physically and emotionally, in the years since. I know it’s a cliché, but it’s also been true for me: ‘What doesn’t kill you, makes you stronger’! 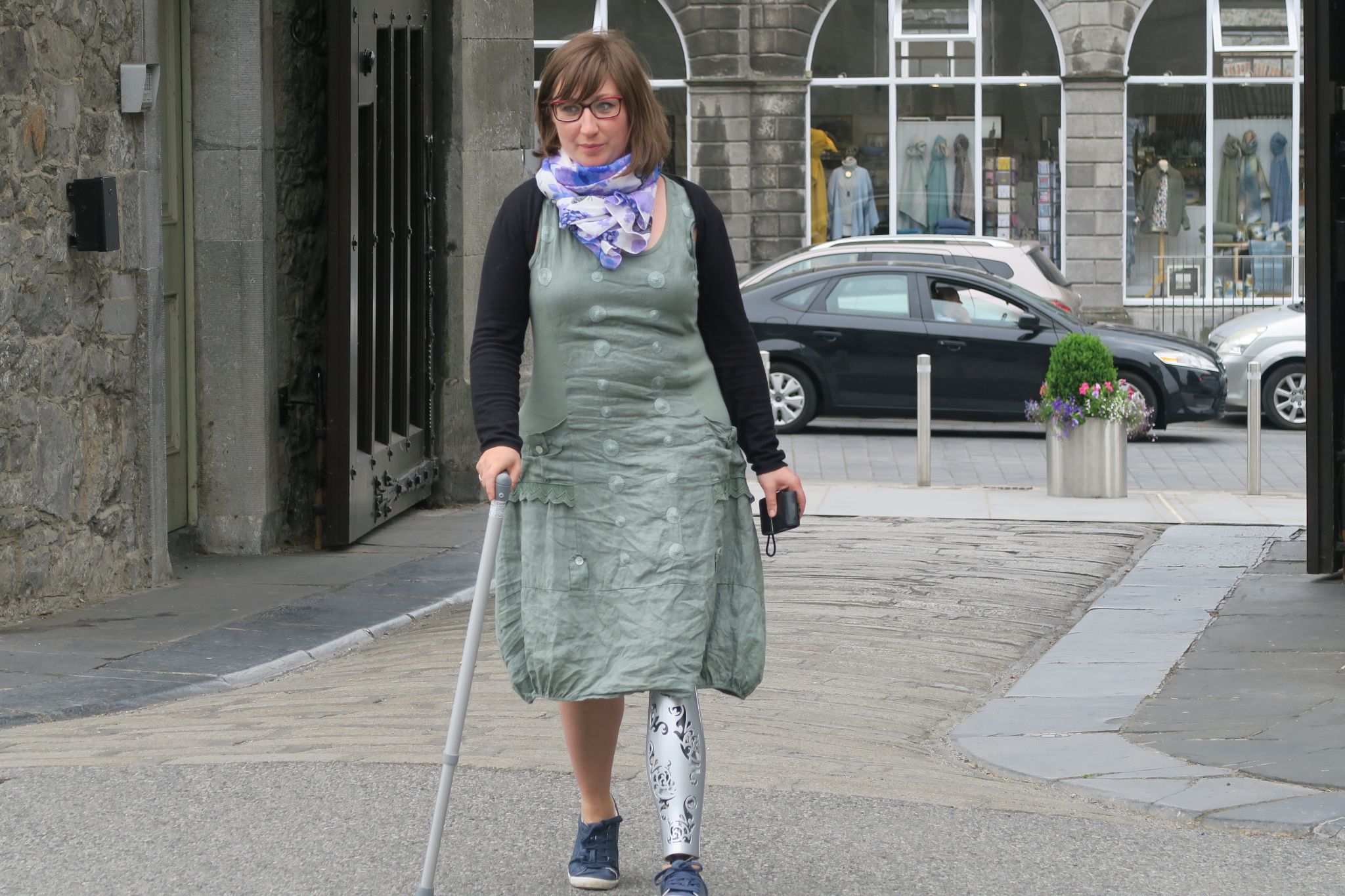 Me and my leg in Kilkenny

One thing that could hugely improve my life at the moment, is a new, better-functioning prosthetic leg. I learned to use the one I currently own after the amputation, and have continued working to get the best out of it since… However; I now can feel its limits. Unlike lower leg prosthetics, which are the most common, the higher prosthetics are still under-developed, being so much rarer. So with the one I have, the hip is very ‘clunky’ and difficult to propel forward (I use my torso muscles), takes so much energy, and the knee doesn’t have a mechanism to control it, so can sometimes fall forward and drop me on the ground.

A much better version of my prosthetic does exist, thankfully – but the catch is: it costs 30,000 euro… I have no chance of paying this myself, so have decided to set up a GoFundMe campaign for it (video above). My hopes are for a better future, in which I can walk more freely, dance on two legs and maybe hike, someday! 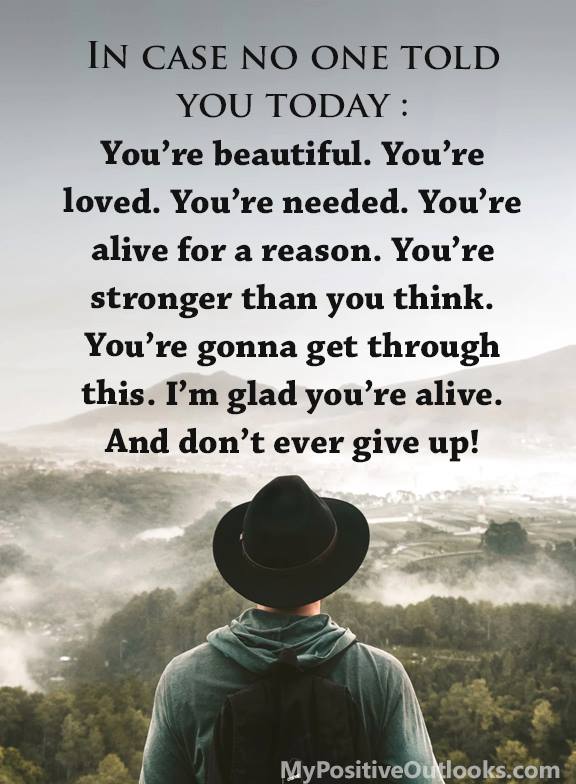 I cannot regret the ups and downs that happened to me since being diagnosed in 2007, because they’ve made me who I am, and I love the person I became. I will continue pushing, in order to improve myself and the quality of my life. This is the advice I might give to someone, heading into their cancer journey: remember who you are inside, that’s really important! Nothing that happens to you can ever change who you are, deep down. And, you are so much stronger than you think.

You can visit Tanya’s GoFundMe page here. Please share it with your friends if you are happy to.

Thank you so much Tanya for sharing your story with us and we wish you luck for reaching your fundraising goal.

If you would like to share your story here on Happy Magazine, please get in touch with holly@happymagazine.ie