Natasha Whelehan, a breast cancer survivor and mum to two beautiful kids, writes for us today about the rollercoaster of losing her hair during cancer and asks, it’s just hair… right?

So you’ve been told you have cancer. The treatment plan is in place. It’s going to involve chemotherapy. For most of us, one of your first thoughts on hearing you will be having chemo is ‘Will I lose my hair?’. Not all chemo regimens result in hair loss so do check with your doctors’ what you can expect.

I know for me, as soon as they confirmed that my cancer had invaded my lymph nodes and I would indeed be having chemo, my breast care nurse told me that I would definitely lose my hair. She was very clear about this fact. There were no ifs or maybes. I would lose my hair. All of it. And it would start to happen about 2 weeks after my first infusion.

I was quite upbeat about it at first. I just didn’t focus on it, didn’t want to really. It was going to be a step in this process, something I would have to go through and that would be that. It’s just hair. It’ll grow back. These were the things people said, the things I told myself.

Going for the chop!

I decided to try and take back some control by cutting my long hair into a pixie cut. I didn’t want the cancer to take my hair, I would cut it myself.

I was pleasantly surprised. I actually liked my hair short! I had always thought I wouldn’t suit short hair, that my face was the wrong shape. I had my surgery before chemo so I had already had a mastectomy. The fact that I actually liked this new short hair really gave me an emotional lift.

During this period I also went and met with a wig specialist. I had been advised it was a good idea to buy your wig before losing your hair so you could match colour, style etc and hopefully get a more natural effect. So I dutifully met with a wonderful lady who helped me pick out a wig that was virtually identical to my new ‘do’. The plan was I would go back when the hair loss started and she would cut my hair back and I would collect my new wig. I left feeling very organised and on top of things.

I started chemo 2 weeks after cutting my hair. For those first days after getting treated I rode out the side effects, but I was always conscious of my hair. Was it thinning? Was it holding on? At about day 9, my scalp started to itch… I knew this was the beginning of it. It was that week it really hit me that I was going to lose my hair. All of it. I would be bald. I was going to lose my eyebrows, my eyelashes, even my nose hair! Chemo doesn’t just target the hair on your head.

I was booked to visit my wig specialist the same day as my second dose of chemo. Unfortunately I developed a wound infection after my surgery and chemo was delayed. I cancelled the hair appointment. We were at Day 13, my hair was still holding on. I had reached the point where the idea of cutting it all off and being bald was becoming all too real. It was still there, still thick and ‘healthy’. I wanted to hold onto it for another few days.

On day 15 I was getting ready to go out and meet some friends for tea. I washed my hair. The first handfuls came away. It’s hard to describe what it’s like. When you look at your hand and see that handful of hair and you know ‘this is it, this is my hair falling out’. The biggest emotions for me were resignation and sadness.

The next day I was readmitted to hospital. Day 16. The hair loss was speeding up. More and more was coming away each time I ran my fingers through my hair… There was hair all over my dressing gown. I just wanted to get out of hospital and get back some of the control I felt was slipping away from me, and for me at that stage in treatment that meant cutting off my hair myself.

I spent four days in hospital and over that time my hair continued to shed. Just before I left I had a shower and washed it properly. That was one of the lowest points of treatment for me. That moment when I stood in the shower and watched my hair literally go down the drain. It felt like there was just SO MUCH hair coming out, I was sure I’d get out of that shower and there’d be none left! The reality is I had a lot more hair than I realised and when I stepped out of the shower there was still plenty left. But the memory of the hair coming out when I washed it and going down that drain will stay with me forever. I cried that day in the shower, angry, frustrated, sad tears. And then I got out of the shower and got dressed and headed outside to meet my lift home.

And then it was gone

A couple of days later I met my hairdresser and she clipped what was left back. In the 6 days since that first handful came away I had lost about 70% of my hair.

That moment when you look in the mirror and see yourself without hair is unique to everyone. I still had a tiny amount of hair, it was basically like a number 1 all over! I felt oddly exposed, and yet in a weird way it was a relief. It was done. It was gone. No more looking in the mirror to see how much was left, no more pulling hair off my clothes and my pillowcase. It was gone. I felt relieved and also indescribably sad. I really was a cancer patient, I really was having chemo. It wasn’t all a bad dream.

Being bald… that includes eyebrows

I got used to having no hair pretty quickly. It was so much easier getting ready in the morning, just wash my head and dry it and pull on a hat! I gave away my hairdryer. Didn’t need that anymore!

Good scalp care is one thing I would recommend. I moisturised my scalp every morning and night to stop it drying out. I also had a really nice oil I used to massage my scalp with at times. I had read that massaging the scalp could help with encouraging hair regrowth so I figured why not, plus it was actually really relaxing!

I watched YouTube tutorials on how to tie scarves and bought several hats. I actually grew to like my hats and scarves and coordinating them with outfits.

I even had a favourite hat, a cosy soft black one I bought about half way through chemo. 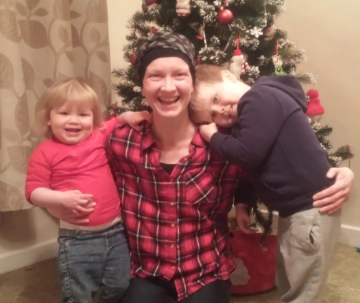 As treatment progressed, my eyebrows started to thin and shed and so did my eyelashes. For me that was harder than losing the hair on my head. I looked in the mirror and didn’t recognise the person staring back. I felt like I looked like an old man or an alien as I regularly told my husband.

I’m not particularly skilled at using make-up and I usually wear very little so I found it harder to draw on eyebrows than I had imagined. I eventually found a really handy little kit that included a stencil and finally felt like I was starting to look more normal. To anyone starting out, I would suggest getting yourself an eyebrow kit that includes a stencil so you have a guideline for the shape from the very beginning. You’ll save yourself a lot of frustration as you try and draw on two matching eyebrows every morning!

The reality is that hair loss IS a big thing. It changes how we look. Changes who we see when we look in the mirror. When you are standing there and you look at yourself and wonder who this sick-looking person is staring back at you, wonder if you will ever feel like you again, it’s hard. I only wore my wig 3 times, I found it too itchy, so from the minute I put on my hat and walked out the door for the first time, I felt that it was obvious I had cancer, it was obvious I was sick.

‘It’s just hair’ people say. ‘It’ll grow back’. The amazing thing is that they are right, it will grow back and faster than you think. Soon you won’t look in the mirror and see the ‘alien’ looking back at you.

I finished chemo on December 20th 2018. Within a couple of weeks I noticed a soft fuzz covering my head. By the end of January the fuzz was becoming a definite shadow. By the end of February, when I finished radiotherapy the shadow was getting thicker and starting to poke out from under my hat in places. 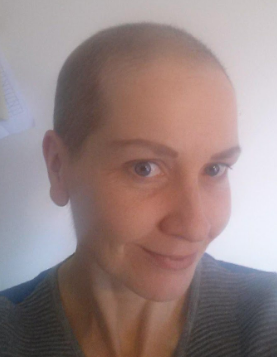 My eyebrows were the real miracle for me though. By the time I finished chemo, I had lost all of them. I was very lucky though, they grew back quickly and evenly, I was able to ditch the stencil and just powder the few thin spots myself by the time I finished radiotherapy.

That was an amazing feeling, the day I looked in the mirror and saw eyebrows frame my face again. The first day I used mascara again. These little things that I had always taken for granted but were now so very precious. I was becoming me again. The alien was disappearing.

I stopped wearing my hat at the beginning of April. My hair was still very short but I decided to just go for it. I had my first post-chemo haircut on June 27th, my 1 year cancer anniversary. It seemed a fitting way to mark the day. 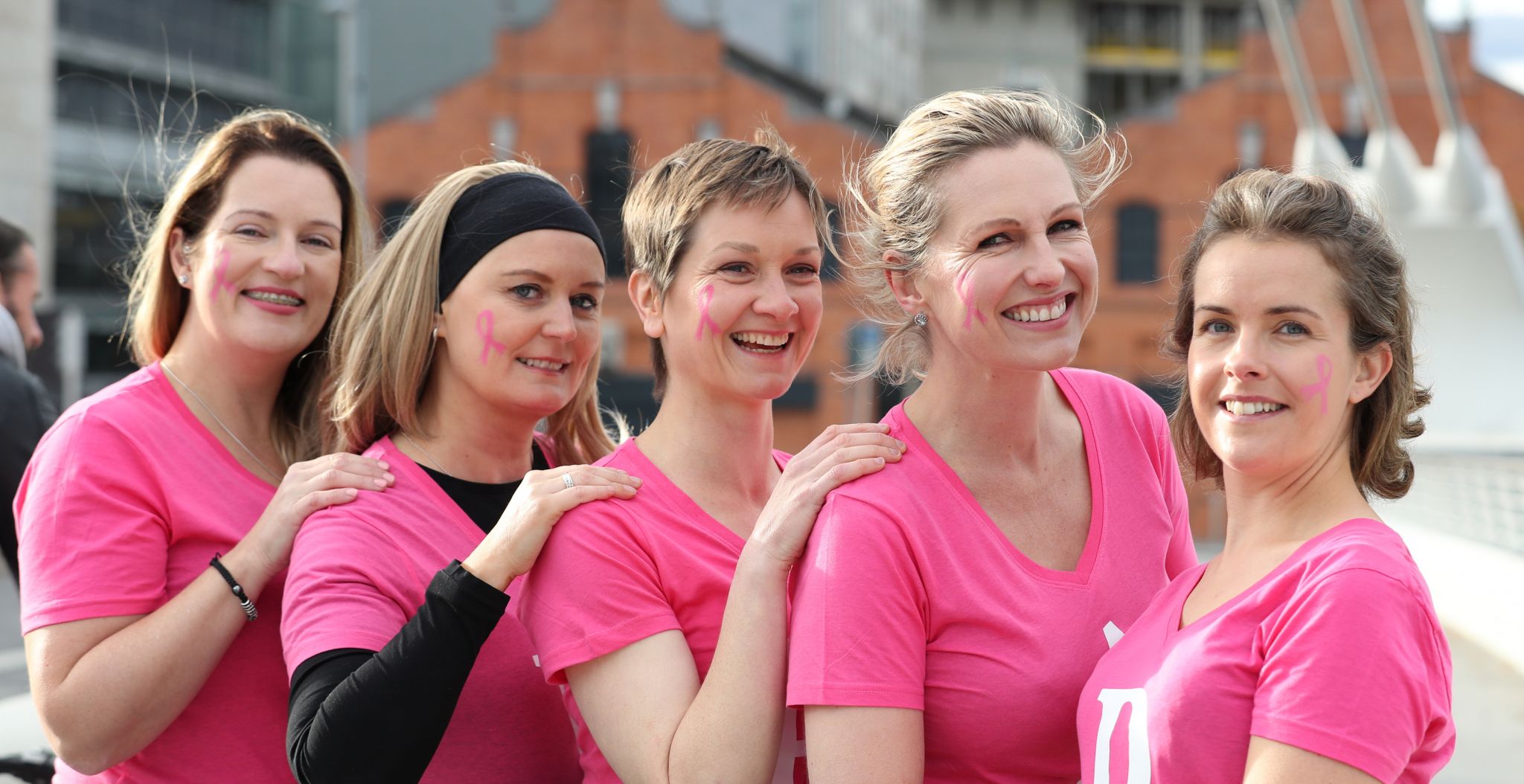 I’m 10 months out from my last chemo now and have had 3 haircuts. I really like my new short pixie cut and intend to keep it this way.

Hair loss is part of the journey for many of us. It impacts everyone differently and there is no right or wrong way feel about losing your hair. Some of us choose to go bald, some wear hats, some love their wig and won’t leave the house without it. It’s your head, it’s your journey. Do what you need to do and what feels right for you.

On a final note I would say for anyone starting out, it’s not ‘just’ hair, but it DOES grow back… so maybe don’t chuck your hairdryer! Hang in there!

Thank you so much to Natasha for contributing this piece for us today. Natasha also recently shared her cancer story with us here on Happy Magazine, you can read that here.