Today Chloe Moloney, one of our Books contributors, writes about the transformative power of make-up and a podcast which helped her through her own health challenges a few years ago.

A few years ago I found myself back in hospital. Too tired to read anything (very unusual for me!), I had a listen to The Women’s Podcast on The Irish Times website. The particular episode featured Marian Keyes, the late Aisling McDermott and Laura Kennedy (click play above to listen).

The podcast focuses on the restorative power of make-up to help lift you from your lowest ebb during times of personal stress; illness, both physical and mental and in Laura Kennedy’s case, caring for a family member with a terminal illness. 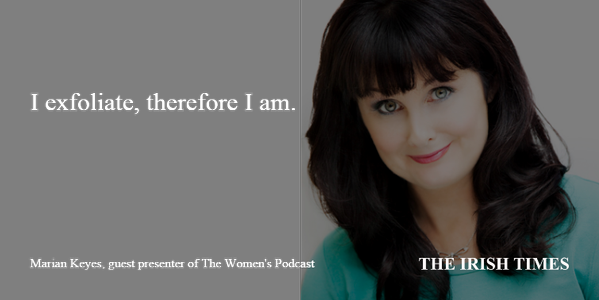 I became quite unwell in my mid-twenties and without sounding overly dramatic, it was looking pretty grim for me until I got a last minute reprieve and a double lung transplant. I generally don’t talk about this much because, like Aisling mentioned, I want to be seen as more than my medical history. However, all three podcast speakers touched on something that resonated with me.

Putting on your make-up or even just something as simple as applying your moisturiser can be important because it’s doing something for yourself. Marian Keyes in particular mentioned that for her ‘make-up is an act of self-respect that may seem frivolous but is quite profound’.

You’re providing self-care at a time when you may not be able to do much more than that for yourself. Before my transplant I was physically quite weak but when I could I’d put on a little mascara, sort out my eyebrows, add a bit of concealer and some lip balm.

It was usually commented on by a doctor and/or a nurse and almost always in a tone of “sure haven’t you more to be worrying about now than putting on your make-up”, which annoyed me and I felt, was designed to belittle me. They failed to understand that what looked like a shallow act was actually me clutching at some sense of ownership and control over my own body.

This is by no means a new concept for me either, when I really thought about it I recalled doing manicures for the female residents of the nursing home I volunteered in when I was younger and the curlers I used to pop in for elderly ladies I’ve nursed in the past. The little things all add up and maybe there is something to be said for the concept of putting on your ‘warpaint’ too.

Of course there are also days where it’s completely acceptable and normal to not lift your head from its pillow but I think it’s important to recognise that when you do want to spend some time on the aesthetics, that’s OK too! 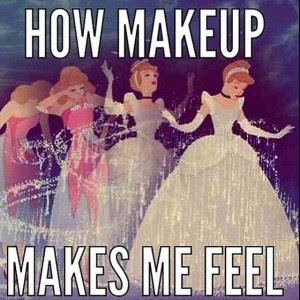 Make-up is seen as superficial and a bit pointless for some and that’s fine.

Personally though, it’s something I enjoy and yes, it’s helped me to feel more like me, at times when I had very little of myself left.

So there I was, back in a similar position once again of being in hospital and hating every minute of it (although I really had no right to feel sorry for myself after listening to that podcast) but I yet again, turned to make-up for solace.

My husband had bought me a Lancôme Beauty Advent Calendar and every day I was in my hospital bed I opened a new door to a shiny little cosmetic treat and I felt that little bit better. I tried a sample of a new-to-me moisturiser from Clinique that is wonderful and in the mornings I fixed my brows, put on a coat of mascara, a spritz of YSL Black Opium and a slick of my Tony Moly peach lip balm and then fell back into bed again. I had done enough to feel a bit more Chloe than I was prior to that. I found the podcast to be really insightful and might be worth having a listen to if you’re in a similar situation.

Chloe is a Dublin-based Nurse & Midwife who loves to read in her spare time. You can read more from her on her blog, Nurse Fancy Pants.