Chloe Moloney is back with us today sharing her latest round-up of reads. If you’re looking for your next book, you might find something in this collection… 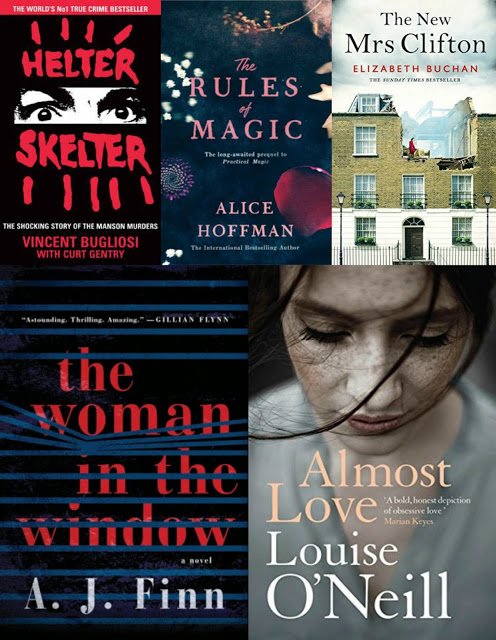 I didn’t get through as many books as usual in March because one in particular completely monopolised my time. Helter Skelter, while interesting in parts, took ages to get through.

This is the very detailed account of the Charles Manson murders of actress Sharon Tate and four others at her LA home in 1969. The book relays the lengthy investigation that led to the arrest of most of the Manson “family” and the subsequent trial.

As it’s written by Vincent Bugliosi, the prosecutor in Manson’s trial, there’s a huge amount of legal details in there that I really felt I had to wade through. That took away from the overall story for me, which I’ve always found intriguing and in fairness, the sections of the book that focus on the cult itself and Manson’s background were engrossing, I just felt that other parts of the book could have easily been shortened without detracting from the essence of the book.

If you’re a fellow fan of true crime you’ll enjoy this anyway, or if you’re just interested in reading up on a historical event you’ll also appreciate Helter Skelter. For me, this was one of the most fascinating parts of this book- I felt like I was fully immersed in the atmosphere of the time.

The Rules of Magic by Alice Hoffman

This is the prequel to Practical Magic, which I just read in January of this year and loved. Set in 1960’s New York, it brings us back to Franny and Jet’s (the Owen’s sisters aunts in PM) teenage years, along with their charismatic brother Vincent.

Their mother Susanna has set down certain rules for them that they have to live by; no wearing black, no candles, no magic books, no walking in the moonlight and most importantly; no falling in love. If an Owens falls in love, a family curse set in 1620 means that harm will come to their beloved so all three valiantly try to avoid love but soon realise they can’t escape it forever.

I really love the way Alice Hoffman writes and especially how she immerses the reader in this world of magic, which is so different from anything else I’ve read. I loved both The Rules of Magic and Practical Magic and I don’t think you need to have read one before the other to enjoy them. I’d recommend both of them!

Set just after WW2, British Intelligence Officer Gus Clifton arrive home to London to his two sisters with his new wife in tow, Krista, a German woman he married in secret.

Krista has been broken by the war; she’s malnourished and unwell but is also traumatised by the horrors inflicted upon her. Her relationship with Gus is strained and his sisters cannot understand why he married her in the first place. Their bitterness over the war and prejudice against the Germans doesn’t help.

Gus has also deeply disappointed his originally intended wife, Nella, who lives nearby, and her brother who now holds a grudge against Gus, who he plans to get revenge on. Both of Gus’s sisters are struggling to cope with what they had to do to survive the war, Tilly in particular is very much on the edge.

Full of dark secrets and betrayals, this is a really good angle on WW2 that I’ve never really come across before. Well worth a read.

The Woman In The Window by A.J. Finn

This is one of those thrillers that gets the “for fans of Gone Girl and Girl On The Train” written on the front of it. As with most of this genre of books, the connection there is the psychological thriller, massive twist and “difficult female protagonist”.

Anna Fox is an agoraphobic psychologist and mother of one. Something catastrophic happened to her six months ago that’s left her unable to leave her home. She has figured out how to survive in her current predicament; she sees a therapist online, she has a downstairs tenant that doubles up as a handyman and for entertainment, she drinks wine and watches her neighbours.

She’s particularly interested in the new family that have moved in across the road and so starts watching them intently, that is until she sees something she shouldn’t have.

This leads to Anna questioning everything she believes to be true, including her own mental faculties. Anna is your classic unreliable narrator so I also questioned everything she said and did but that aside, she’s a difficult character to spend an entire novel with.

Like the protagonist in Girl On The Train, Anna has an alcohol dependency problem and so I spent a lot of the book telling her to “stop doing that!!”. It’s frustrating but real life is like that, I guess.

One thing I would say is there’s two fairly major twists (as there is with all of these sorts of books) which I had guessed well in advance. The clues are there and are easy enough to spot, if you’re looking out for them.

Overall, I liked the undertones of film noir and Alfred Hitchcock throughout this book but I felt it was drawn out and somewhat lacking nonetheless.

Practically known now for her “unlikeable characters”, Louis O’Neill has created perhaps the most unpleasant female protagonist of all with Sarah, a young art teacher living in Dublin, sacrificing everyone else in her life for the man twenty years her senior she is seeing. Sarah hopes Matthew will realise some day that he in fact loves her and can’t be without her but that seems extremely unlikely to even the most casual observer; Matthew is married, is a narcissist and uses Sarah for grotty sex in a grotty hotel room. But, and here’s the catch, he does tell her from the start that he doesn’t want a relationship. That doesn’t and can’t excuse his behaviour but still, Sarah plays a part in her own undoing, something you couldn’t have said about Emma in Asking For It or Frieda in Only Ever Yours (O’Neill’s two previous books).

This, if anything makes Almost Love more thought provoking. A common cry after reading this book has been “God, I wish I could go back and give this to my teenage self”, such is the recognisable and clumsy attempts at love from a young woman trying for a breezy “oh I don’t want a relationship, I’m a cool, easy going girl, just like a guy really”, of her actions and words.

The storyline is non-linear; we get flashbacks to when Sarah was in art college and first meets Matthew, very much at the expense of her best friend Fionn, right up to the present time, where she is in a relationship with a new man, Oisín. Sarah can’t seem to get any element of her life right and you could say she’s her own worst enemy, but equally she’s a painfully damaged character, with a sad past. My feelings for Sarah are so complicated; she’s difficult and extremely unlikeable but also, she really needs help. At times, I wanted to slap her, other times I wanted to reach in and hug her and give her the name of a good therapist.

I still don’t know how I really feel about Almost Love, but I can say it’s an addictive read (I finished it in an evening) and it certainly got me thinking. Thinking about my own behaviour when I was younger, about the expectations and the roles placed on women by society and about the different types of love.

A difficult book to read at times but without a doubt, it’s an unflinching look at obsessive love and quite unlike any other book on the market right now.

Have you read any of these? What are you reading right now?

Chloe is a Dublin-based Nurse & Midwife who loves to read in her spare time. This collection of reviews first appeared on her blog, Nurse Fancy Pants, on Sunday 13 May 2018. It is republished here with permission.