Joy of Joyful Antidotes is back with us today with her latest book review – Fighting Monsters by Rebecca Bradley. 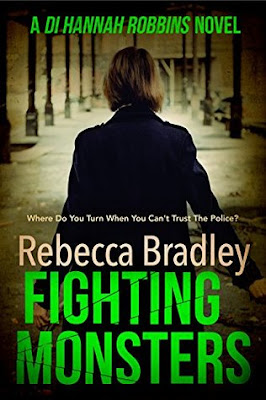 I feel like every time I write a review I start with saying “I love books about X” or “I love genre X”. The thing is, I read so many different types of books that I end up loving so many genres, themes, writing styles, etc. This review is no different. Reading this book made me realise how much I love detective books – and this is one of the good ones.

Fighting Monsters by Rebecca Bradley is the third book in the DI Hannah Robbins series. It begins with Simon Talbot walking away from court a free man after shooting and killing a police officer. Twenty-four hours later and Talbot is dead, found with the name of a protected witness from his trial in his pocket. The clock is ticking for Hannah and her team to find out who killed Talbot before things get out of control.

I want to start this review by saying that this is genuinely a book that can be read as a standalone. I didn’t read the other books in the series myself, which of course meant that I was wary of the fact that I could be missing information that would give me a well-rounded view of the story. It really felt as if I were missing nothing when reading Fighting Monsters; I got all I needed from its pages.

There is an element of Fighting Monsters that is based around gangland crime. This made the book all the better for me as it reminded me a little of some of my favourite shows like Love/Hateand The Sopranos. The other aspect of the book that I really liked was the two strong female characters, Hannah and Pasha. I admired Hannah but I found Pasha more likeable and the character I would want to explore more in further books. However, overall, it does take a while to get a feel for the characters but when you do, you learn to appreciate how distinct and well-developed they are.

Another thing I really liked about Fighting Monsters was Bradley’s use of descriptive text. For instance, there is a scene in which Hannah ponders the smell of blood. The smell of blood is not something I’ve ever really thought about before this passage and it really brought me to the scene of the crime. Similarly, Bradley brings to life the atmosphere of the police station very well.

The chapters in this book are quite short and each chapter is told from the perspective of a character. However, the chapters are only focused on three characters – Hannah, Pasha and Lee – which helps keeps the momentum snappy. Throughout these chapters I built up my own conclusion but I’m not going to say if I was right or not. What I will say is that I didn’t find the ending to be a huge shock but it made sense. I like that in an ending. Some books have a totally shocking ending but when you rehash the information given throughout the story, it seems to have been pulled out of thin air and that can be frustrating.

Overall, I really enjoyed Fighting Monsters and am happy to be awakened to a new series. If you like drama and cops, then I think you are going to get sucked into Hannah’s world too.

I was sent a copy of this book in exchange for an honest review.

This post first appeared on Joyful Antidotes. It has been re-published here with permission.

Joy is an Irish girl living in Berlin, a full-time content marketer and an almost full-time blogger. She started her blog Joyful Antidotes in 2011 after completing an internship on the news team of an NGO. It was at that point that she decided she would dedicate most of her energy to a career in writing, whether it be through or blog or as an employee at a company. Over the years her blog has grown from a digital diary of her life in Berlin to a forum for book reviews.