We’re delighted to welcome Chloe Moloney to Happy Magazine. Chloe regularly shares great book reviews over on her blog Nurse Fancy Pants and today she is sharing her latest round-up of reads with us here. If you’re looking for your next book, we think you might find something in this collection… 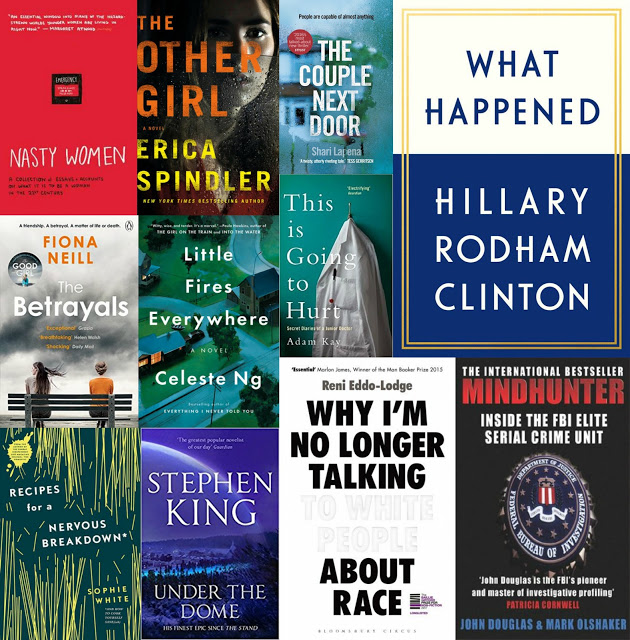 This is a collection of essays written by women from different backgrounds, ethnicity’s, sexual orientations, educations, etc. about being a woman in the 21st century when intolerance, misogyny and political turmoil seem to be on the rise. The name refers to the now infamous quote from Trump, referring to Hillary Clinton, which has become a badge of honour for some women in the states. I really enjoyed reading this, the different perspectives on a variety of topics kept it fresh and interesting and I kept wanting to read on to the next essay, regardless of how tired I was at the time!

The Other Girl by Erica Spindler

Miranda Rader is a detective and a good one at that. Her kidnapping and attempted rape as a teenager, left her determined to make something of herself and put her into a position of authority where she can help other women. No one believed her when she was a teenager, about her own attack or about the girl who was taken with her and who was never found. Miranda has for the most part put this behind her, that is until she and her partner are called to a murder scene where the victim had a newspaper clipping detailing Miranda’s kidnapping. He has been brutally murdered and by his injuries, it looks like a woman could be the perpetrator. Then Miranda’s prints are found at the scene and things start to look very bad for her indeed. This is a great little thriller that kept me guessing thanks to a few twists and turns and the odd red herring thrown in for good measure! I really liked Miranda’s character and the love story/steamy sex scenes didn’t do any harm either!

I featured this in my top 5 books of the year. It was another book club read but much more successful this time. Elena Richardson is a journalist and mother of four, living in an affluent suburb of Cleveland. She is wealthy, successful and respected in her town, which she thinks is down to playing by the rules, something she’s prided herself on her entire life. That all gets shaken up when free-spirited artist Mia and her teenage daughter Pearl move to the area; Elena’s four children immediately becoming obsessed with them both, which makes Elena uneasy and envious. A local adoption involving Elena’s best friend turns into a vicious custody battle that makes enemies of Elena and Mia and Elena decides to use her journalistic skills to uncover secrets about Mia’s former life in an effort to destroy her.

I’ve had a few people say they started this (on my recommendation… eep!) but found it quite slow moving. It is a slow burner, for sure, but it’s beautifully written and atmospheric. The characters feel like real, flawed humans and I could understand their motives, even when they did terrible things. If you’re looking for a quick, easy read, this isn’t it but stick with it, it’s gratifying in the end. Promise!

Recipes For A Nervous Breakdown by Sophie White

This is part memoir, part self-help book, part recipe book. I enjoyed all the parts. Sophie White was a regular gal, living a regular life until she took a tablet at a festival which led to the worst trip of her life and a knock on effect of debilitating mental illness for the next few years. The book covers that time but also her recovery, how she met her husband, their travels together and how she became a chef. The recipes throughout coincide with these times in her life, along with “meals to eat when…” you’re pregnant, hungover, in love etc. I loved this book. It gave me so many recipe ideas, beautiful food photos to look at, good life advice and overall an interesting life story to read.

Under The Dome by Stephen King

This is your classic King; small town Americana full of good and bad people who must face an un-fightable force of evil in order to survive… if the bad guys don’t kill all the good guys along the way first, that is. A clear barrier descends over a small town, landing directly on the town borders. Nothing can pass in or out without annihilation and it cannot be destroyed. The longer it’s there, the worse the oxygen levels become and the more likely it is that the town’s resident mini dictator/murderer will destroy all the townsfolk. This was so gripping and as with all King books you get completely engrossed and attached to the characters. So many times I got annoyed and could be heard exclaiming “WHY? WHY HIM?!” etc. It’s long, so you really have to like your King to take this one on – it’s not his best but that’s a pretty high bar anyway. I enjoyed muchly.

The Couple Next Door by Shari Lapena

This is one of the bigger bestselling thrillers from last year. It seemed at one point like everyone was reading The Couple Next Door. Two couples are at a dinner party, one of the couples have a baby daughter who they’ve left unattended in their home next door, with the baby monitor on. They check on her every half an hour. When they at last leave the dinner party it’s been an hour since they checked on her and to their horror, find she’s not in her cot – she’s been kidnapped. No one is beyond suspicion; the couple themselves, their neighbours, their family etc and the book is really just about figuring out who took her and why. There’s a few twists and turns and overall it’s a really quick and entertaining thriller, without a huge amount of substance.

Reni Eddo-Lodge originally wrote an essay with the same name, which garnered so much interest she was asked to expand on the topic and write a novel, and here it is. The first quarter of the book explores the origins of racism in the UK and what role it currently plays in modern Britain. Here, she discusses whitewashed feminism, the connection between class and race and her suggestions for how we can acknowledge and counter racism when it occurs. This is a huge issue right now with modern feminism branching off between intersectionality and those who well, don’t understand the actual meaning of feminism I guess?! I enjoy reading and learning as much as I can about feminism and how I can practice intersectional feminism and be a more inclusive and supportive feminist while acknowledging my own privilege, and I found this was a really astute perspective that would be helpful to most feminists.

What Happened by Hillary Rodham Clinton

I mean, we all want to know the answer to that one, am I right? Hillary taking the blame squarely for it herself in this book about her run and subsequent loss of the US presidency. Also to blame of course are misogyny, sexism, the Russians, those damn emails, the head of the FBI, a feeling amongst Americans that there needed to be a change in the status quo and the inexplicable popularity of Donald Trump. I’m not a blind follower of Clinton, I’m well aware of mistakes she has made throughout her 30 year career in politics (I still can’t reconcile the fact that a woman with 30 years experience in the job lost to a male reality TV show host), which she also addresses in this book. She holds her hands up and admits to things she would not do the same if she had a second chance. But she also makes the valid point that male politicians regularly make huge errors of judgement that effect millions and their careers aren’t tarnished forever more. For me, this book provided a lot of food for thought. I had been following the US election so I was interested anyway but I also think hearing from the first major female presidential nominee after her defeat is an interesting read! I listened to this on audible cause HRC reads it herself so it fees more authentic that way, even though she can be a little stiff sometimes in her delivery. There’s a lot of political discussion in here – what she planned to do if she had won etc. that isn’t particularly fascinating but overall I enjoyed it and felt like I learnt a lot more about her as a person – and she is an interesting woman. If you’re interested in politics and feminism and how those two coincide then you’ll enjoy this too.

This is the book that the recent Netflix series Mindhunter was based on. There’s some minor changes between the two but it’s the same basic gist. I feel like I learnt more about the life of John Douglas (the main character in the show) from reading this and there’s definitely far much more detail on the crimes featured in the series in here, as well as plenty of crimes that aren’t (season 2 anyone?). There’s also a lot more information about profiling itself, which I find compelling. Overall, an insightful read that kept me captivated, once I got past the first few chapters (those were a little slow). If you like True Crime, this is a good’un.

OK, I was not brief but it’s hard not to gush about books! Tell me, have you read any of these? What are you currently reading?

Chloe is a Dublin-based Nurse & Midwife who loves to read in her spare time. This collection of reviews first appeared on her blog, Nurse Fancy Pants, on Wednesday 7 February 2018. It has been slightly amended for Happy Magazine and republished here with permission.